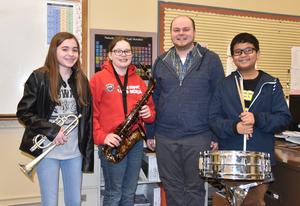 Three PCS Jr High students have been selected to participate in the Oregon Music Educators Association (OMEA) District 2 Middle School Honor Band.  The Honor Band consists of students with similar interests and ability levels from twenty different schools around the East Multnomah County area. The students will work with a guest conductor all day Friday, April 5th at Parkrose High School. The Honor Band will then perform a concert on April 6, putting into practice what they learned.

Each of these students began playing in the PCS fourth grade elementary school band with Mrs. Lisa Singleterry. They are now part of the Junior High Band class with Mr. Joseph Ostrand.

Emma Ortman began playing the trumpet just last fall.  A talented musician who also plays the piano, saxophone, and flute, she hopes to also pick up the clarinet and violin soon.  Evan Roberts “likes the sound of the saxophone,” noting that “it’s easy to play once you know the fingering.” Since nobody in her family plays any instruments, she think’s “it’s cool” to be part of the Honor Band. Sanjae Sy was anxious to join the band as 3rd grader, and by the 4th grade, easily picked up the snare.  He enjoys practicing during his down time, or even just to pass the time when he’s bored!

All three students say they are “Excited!” to join the Honor Band as they look forward to this unique opportunity to build musicianship, skill, and passion for instrumental music.
Print