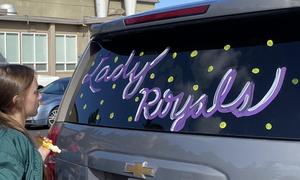 The season had many exciting moments, that included some great wins, team activities, and some great rewards for many of our student-athletes.
This year we had teams compete at nearly every grade level.
We had elementary basketball for grades 3rd-5th for girls and 4th-5th for boys. These teams were lead by some great volunteer coaches that we are so thankful for.  Scott Coyle, Kassandra Jackson, Jason DuClos, Kyle Cowan, Matt Singleterry, John Felton, Carly Brunner, Jonathan Hughes, Brian Johnson, Erik Calhoun, and John Patan, thank you for volunteering and coaching these young basketball players!
Our junior high girls team had enough players for two teams and our boys junior high team had three different teams with 30 players this year. The girls team was coached by Lilly Funk and assisted by Laurie Fowlkes and Matt Marine. The boys program was coached by Jon Roberts and assisted by Jonathan Hughes. Our junior high boys basketball team competed in the Metro Christian League playoffs as one of the top four teams in the league.
The high school basketball teams also had great success this year. Our JV boys basketball team was led by coach John Felton and assisted by Chris Andrews. This team had a great season winning many of their games.
The Varsity boys team won 12 games this year and hosted a first round playoff game, losing in overtime. The boys enjoyed some great time together golfing and going to a Blazer game: thank you Shane McLaughlin. From left, standing: Coach Remsburg, Cayden McLaughlin, Spencer Siegel, Eoghan Collopy, Kyle Wicklander, Kameron Gomez, David Baek, Coach Cowan
From left, seated: Nick Watson, Shicheng Ma, Gary Long, Dakota Guild, Jake Scacco, Ashton Bautista, Haruto Yamazaki
This was also the last year of coaching for coach Rich Remsburg. He has decided to officially retire after 42 years of coaching basketball at Portland Christian. Thank you Rich!
Kyle Wicklander was named 2nd team All-League; Eoghan Collopy and Kameron Gomez were named to the 3rd team All-League.
The girls basketball team was a league champion for the second year in a row. They qualified for the state playoffs in Pendleton as one of the final eight teams in 2A.