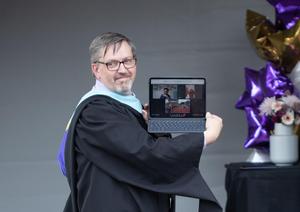 Of the 41 students who graduated on the football field on June 5, 2021, Ryan Ding was one of two students who participated via Google Meet.

Ding was a bobbing head on a laptop on the stage, watching his classmates and listening to messages, speeches, and award and diploma presentations.

The COVID pandemic stranded him in China.  After Oregon shut down in-person classes in March 2020, Ding flew back to China to be with his family.  Taking advantage of a hastily-arranged flight, it took him 13 hours to get to China (with no food during the flight); several hours to get through COVID testing, a 1-1/2 hour bus ride to his assigned hotel, and 14 days of quarantine, before he was reunited with his family.

During his 14 days of quarantine and the days until the end of his junior year in 2020, Ding attended PCS’s distance learning classes.  PCS teachers taught via Zoom and created videos to share with their students.  Having classes to focus on helped Ding through the quarantine period that he calls “horrific,” as he was by himself 24-7.

Summer break with his family in Tianjin, China were “months of happiness” says Ding.  He was pleased that he didn’t get infected with COVID.  But as he and his family looked towards returning to PCS for his senior year in the fall of 2020, they decided they wanted to wait until things calmed down in Portland. For the time-being, he would continue distance learning, at PCS.  He thought he would return in person by Thanksgiving.  But that changed to Christmas, and then to the spring time frame.  Ding shares that there was “a time I got overwhelmed. It was in the middle of March, the middle of the semester.  I thought I was not going to take this anymore.”  By this time, the school had implemented “synchronous learning,” so the on-line students attended class at the same time as in-person students. To study at PCS from China,, Ding’s school day began at 11 pm.  That was his first class.  His school day usually ended at around 3 or 4 am!!

Realizing he would not be able to return to the US in the foreseeable future, Ding made a commitment to complete his senior year at PCS from China.  Teachers managed to accommodate some of their classes to him.  For example, band teacher Mr. Ostrand, would often stay at school until 8 pm (PST) so it would be Ding’s day time, and Ding would receive his clarinet instruction.  Ding was even able to be part of a Christmas band and choir recording that Mr. O put together for the school community.

Ding thanks many PCS staff and teachers for the impact they had on his life here in the USA.  Of Mrs. Sheila Tretter (Director of the International Student Program, retired), he says, “I would not be me without you.”  She interviewed him via Skype when he was just 13 years old, and accepted him into the PCS ISP program to begin when he was ready for freshman year.  He recollects other teachers such as Mrs. Laurel Tolleson (now retired), Mr. Andrew Jannsen, Mr. John Felton and host family coordinator Mrs. Kathy Nyone, as impacting him as well.  More recent teachers, Mrs. Rachel Humphrey and Mr. Troy Wagner, encouraged him with on-line conversations.  One of Ding’s realizations after a year of digital learning is that he realized, “communication is very important.  After a few months of . . .  no social interaction, it drove me crazy.  I want to hug, to communicate, to share.”  So teachers who were willing to take some time to just talk long-distance became essential.

Thanks to his interaction with these teachers, Ding was able to build a foundation of understanding and knowledge of Christianity.  Since his first semester in college, his faith and commitment have deepened and this fall, Ding was baptized at his church in Arizona.  Yes, Ding was finally able to make it back to the U.S! Tretter explains, “Ryan had been working on applying [to college] for quite a while.  He was the first 2021 PCS senior that got accepted to college.”

“I was so excited. Dude!  The biggest news of 2021 was that I was accepted by Arizona State University.  That was my first choice school,” exclaims Ding. He is now studying actuary science at ASU.

Ding visited PCS over his winter break, December 2021-January 2022. The rainy Pacific Northwest reminded him of why he chose to go to school in Tempe, Arizona!!  As he reflected on his time at PCS, he noted that he wished he could have been here in person for his high school graduation last year in June of 2021:  “all the four years of striving was for that moment.”

It was a pensive moment as he held his diploma and yearbook that he had just picked up in the high school office. In a spur-of-the-moment “ceremony," Mrs. Tretter and Mr. Wagner, presented Ding’s diploma to him as though he were on stage back at the graduation ceremony. What it lacked in pomp and circumstance, it made up for in sincerity – and even allowed for a quick photo op! As some of the business office staff applauded, Ding celebrated, “Today, I got my diploma - at least I share this moment with somebody.”