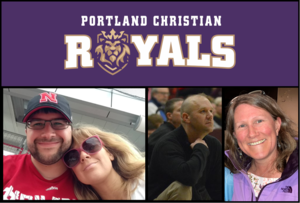 Get ready for an awesome year with PC Athletics!

It’s no secret that Covid played havoc with athletics — followed soon after by the departure of key Portland Christian athletics employees.  PC Athletics is ready for a reboot! We’ve re-organized the department into Jr/Sr High School and Elementary sections and have brought in some exciting new talent.  Get ready for an awesome year with PC Athletics! Ryan graduated from Louisville High School in Louisville, NE.  As a student-athlete at Louisville, he participated in football, wrestling, track, and baseball as well as drama, speech/debate, quiz bowl, student council, Fellowship of Christian Athletes, and National Honor Society.  It was also in Louisville that Ryan became a member of the United Methodist Church, a membership he has enjoyed for the past 17 years.

Upon graduation, Ryan attended Iowa Western Community College in Council Bluffs, IA, where he obtained his Associates Degree in K-12 Instruction and played on the baseball team.  He continued on to Wayne State College in Wayne, NE.  While at Wayne, Ryan wrestled for the college, where he was a 2x National Qualifier and earned First Team Academic All-American honors. He graduated from Wayne in 2015 with a Bachelor of Arts Degree for Social Science Education with a Coaching Endorsement.

For the past seven years, Ryan has been a teacher and coach and has assisted in the administration of his schools’ athletics departments in Nebraska and Arizona.  He has taught history, government, and economics while also head coaching football, wrestling, baseball, and track for high school and junior high levels. Ryan’s former colleagues have nothing but high praise for him.  In the words of one of his colleagues, “Ryan is detail oriented and student driven. Ryan is a servant leader and an outstanding human being.”

Ryan and his wife of four years, Erica, moved from Tucson to Portland this year when Ryan accepted a position as the head wrestling coach at Warner Pacific University. Ryan’s love for high school athletics and helping students to achieve their athletic goals while developing their relationship with Christ has led him to Portland Christian. Ryan will continue coaching at Warner while leading the PCS Jr/Sr High School athletics department.

Ryan enjoys hunting and fishing, spending time with his wife, and playing with their fur child Munster. He says that he is “absolutely excited to join the Royals family, to get to meet everyone, and to become part of the amazing community at Portland Christian.  GO ROYALS!!!” After graduation from Portland State University in 2001, Erik began his basketball career as one of three Public Relations officials with the Portland Trail Blazers where he worked for the next seven years. After his run with the Blazers where he was also heavily involved in the youth camp and clinic program, he took a job with the Portland Timbers in 2010 where he continues to work and directs all Youth Programs for the Portland Timbers and Portland Thorns. Coach Lyslo is blessed to have his wife (Katie), and two kids (Brandon and Hannah) who both attend PC high school and middle school, at his side during all games he coaches.

Erik was the boys varsity basketball head coach at Gresham High School from 2016-2022. He took over the state’s lowest ranked 6A program in 2016 (ranked 52 out of 52 teams while in a stretch of a 40-game conference losing streak). After two rebuilding seasons, he led the Gophers to four-straight state playoff appearances for the first time in school history with a 63 percent winning percentage (58-34 record) and a 2-4 record in the post-season. The four-year stretch was the best stretch in Gresham High School history, dating back over 80 years. He twice led his Gophers to the Les Schwab Invitational, one of the top high school tournaments in the country and invite only, which was a first in program history. His Gopher teams led the Mt. Hood Conference in points per game two out of the last three years and ranked top 10 in Oregon in 2019-20. Coach Lyslo graduated 100 percent of his players in his six years at Gresham and saw 75 percent of these players go on to college. Twelve of his players went on to play college basketball in the six-year run.

Prior to Gresham, Erik was the Faith Bible boys varsity basketball head coach in 2015-16.  The team had only one returning player and finished the season with a 10-14 record, just missing out on the playoffs. 2016 graduated 100 percent of the team’s players with 90 percent going on to college.

Erik head coached the Portland Christian boys varsity basketball team from 2012-15.  He led PC to two playoff appearances in three years where his teams ranked first in the conference in defensive points per game in 2012-13 and 2013-14. One hundred percent of his players graduated with 90 percent going on to college.

PC is pleased to welcome Erik back to our coaching staff and Erik is excited to return, saying, “I am blessed and humbled to have the opportunity to come back to Portland Christian and lead the boys’ basketball program. I had nothing but great memories at PC when I coached here in 2012-15. This is a program that has seen some tremendous players and coaches come through this school over the years and we want to bring back the strong tradition of success and support while being great representatives in the community and to our faith. While leaving Gresham High School is one of the hardest decisions I have had to make as a coach, I am truly excited to be back at PC and get started with some great kids, parents and school officials. Go Royals!” Elaine brings to the newly created Elementary Athletic Director position, 30+ years of experience in working with youth and a desire for seeing youth develop spiritually, emotionally, and physically while developing new skills in athletics.

Elaine’s sports career began at 9 years old, playing softball. At Illinois Valley High School, she earned varsity letters in cross country, basketball, track, and softball, and was a state meet qualifier in the 300 meter low hurdles, setting a school record. She was voted most athletic by her peers. Elaine participated in collegiate cross country/track and field at George Fox University from 1987 – 1991. As a member of the 1988 George Fox women's cross country team, Elaine helped the team achieve eighth place at the national meet -- at the time, GFU’s highest NAIA national team finish.  While attending GFU, Elaine was coached and mentored by beloved coach, Wes Cook.

She and her husband Gerald have two boys at Portland Christian. Both boys love sports (like their momma) and compete on many of the PC athletics teams. The Kempenichs have been a part of the PC community “for 9 awesome years.”

Elaine enjoys physical activities in the outdoors such as mountain climbing and backpacking.  She has played basketball in China against Chinese firefighters and has used sports as a witnessing tool to share the gospel.

“Most importantly,” Elaine says, “athletic development and personal achievement are all for the glory of God. The lessons and character Jesus has taught me through athletics are key to helping me relate to the youth at Portland Christian Schools.”