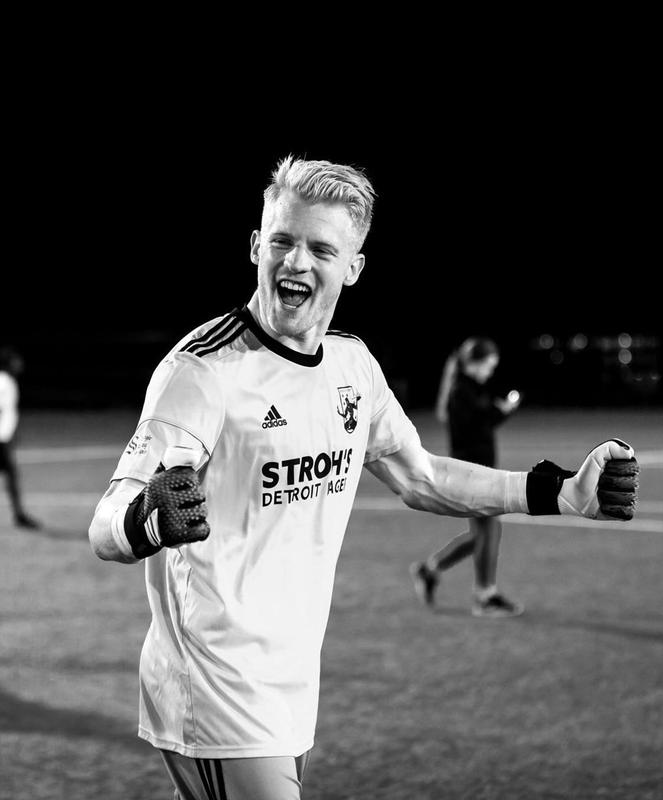 PCS alumnus Austin Rogers returned to the school to share his story with students.

PCS alumnus Austin Rogers, Class of 2014, returned to the school to share his story with students. He spoke at a special chapel for 8th grade – high school. The event was part of a week-long “Royal Encounter” to introduce PCS 8th graders to the high school experience.

Austin attended PCS from kindergarten through high school, graduating in 2014. He had dreamed of playing soccer professionally since he was a young boy -- and realized early on that goal keeper was the position he loved. He played on the school team and also club soccer throughout his school years.

High school students usually begin to seriously check out colleges in their junior year. In pursuit of his dream, Austin spent many hours emailing every Division I, Division II, Division III, and NAIA college and university in the U.S. with a men’s soccer team. Since his goal was to play professionally, he had a thought – why not contact professional soccer teams as well … maybe playing soccer in college wasn’t necessary to reach his goal of playing professionally…! With that idea in mind, he emailed his resume to every professional soccer team in the world.  It took several months, but it paid off – he was invited to train with the Luxembourg team the summer of his junior year.

Skipping college, however, was not his parents’ idea of a successful life plan. A compromise was reached – Austin could pursue his dream of playing professionally while completing his college degree on-line.  In 2020, Austin graduated from Eastern Oregon University with a bachelor’s degree in communications and business.

In the meantime, his appeals to soccer teams the world over were being turned away because he did not have a visa. He discovered that there were only a handful of countries that would permit him to enter without a visa. He was thrilled to be invited to join a team in Albania and his life changed dramatically. He was now an American Christian living in a country full of devout Muslims – it was a cultural adjustment, to say the least! He shared how uncomfortable he felt being the only one in a crowd not participating when the call to prayer sounded five times each day.

Austin was next invited to Mongolia to help build up the country's program.  Living in the luxurious city center, Austin longed to move beyond his privileged life to help others. He shared that this was a value he learned at PCS. In response, he and some fellow athletes started a free soccer academy in Mongolia, to reach out to youth from the poorer districts.

Over his eight-year playing career, Austin spent time in many different countries beyond Albania and Mongolia.  He played in Kosovo, Romania, Greece, Austria, Ukraine, Africa, and Spain, just to name a few.

In 2020, he returned to the U.S. to play with the Detroit City FC. He signed a contract in February, and in March, life once again took a dramatic turn when EVERYTHING was canceled due to the Covid pandemic. Team members were sent home and given no return date. Without soccer, he felt bereft – up until this time, soccer had been his whole identity.  Again, he turned to his Christian faith for answers.

While he was back home in Portland, Austin met Sarah Garner, who was also back in Portland from school due to the pandemic. They fell in love and got married in the summer of 2022.  At this time, Austin’s plans do not include returning to competition, but time will tell. He currently coaches youth at Eastside Timbers, Oregon’s Olympic Development Program, and Warner Pacific College.  During the day, he works at Eastside United as the Director of Operations, focusing on project management.

Austin has offered himself as a resource for PCS students. He can be contacted at [email protected].  Austin will also be coming in once a month to meet with high school students to help them with the college recruiting process.  Austin is offering this free service to all Portland Christian students.